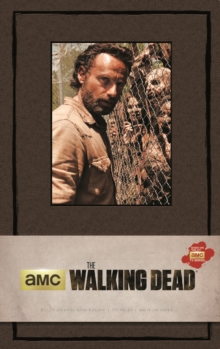 Celebrate all the horrifying thrills of AMC's hit original show The Walking Dead with this journal featuring lead character Rick Grimes. Rick Grimes was a small-town sheriff who was wounded in the line of duty and woke to find himself in a walker apocalypse.

An everyman, Rick leads his desperate band of survivors while clinging to his moral code in the face of increasingly dire circumstances.