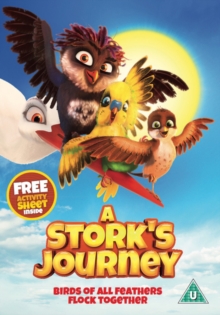 Animated adventure directed by Toby Genkel. Young Richard (voice of Cooper Kelly Kramer/Tilman Döbler) is a sparrow, though having been orphaned at birth and raised by storks he behaves very much like a stork.

One thing Richard cannot imitate however is the migratory habits of storks and so when it becomes time for the storks to fly south they have no choice but to leave Richard behind.

Nonetheless, Richard is undeterred and decides to travel south to Africa anyway with the help of his new companions, Olga (Shannon Conley) and Kiki (Christian Gaul).