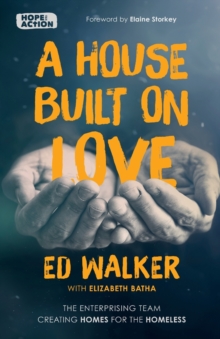 A House Built on Love: The enterprising team creating homes for the homeless Paperback / softback

All struggle to find a home, to build relationships, to get back on their feet.

The root cause of homelessness is relational: the homeless suffer not just the lack of a roof, but a lack of love.

But what if someone could provide not only a home, but also a network?

Real people, who knew what they were doing, and who cared?In 2007 Ed Walker published with Monarch Books a book called Reflections from the Scorched Earth.

It described his nine years of living and working in six distinct war zones - notably in Darfur - as a Christian humanitarian aid worker with Tearfund.

Returning to the UK, Ed worked for the YMCA for three years.

But before long Ed and Rachel felt the call to start a genuinely Christian charity working with ex-offenders and the homeless.

The private rental sector was out of reach for many, and government provision was horribly inadequate.

Both problems have grown massively in the subsequent years. Scraping together every penny they could find, in 2010 the young couple set up a charity, Hope into Action, invested GBP30,000 in a house and bought the first home for the homeless in partnership with their church. This charity has now grown to 51 homes across fifteen towns and cities.

Hope into Action have won numerous awards both secular and Christian (they won the Guardian's Public Service Award in 2017, and an award from the Centre for Social Justice).

The vision is simple, but devastatingly effective. It provides a vehicle for Christians with money to invest in housing stock, with a modest but guaranteed return.

Once funds in a locality are available, and in partnership with a local church, HiA will select a suitable house, which is refurbished as necessary.

Together with the local church, the members of which will receive training from HiA in befriending and providing guidance, HiA will select suitable tenants.

The churches offer friendship and local contacts. The underlying vision is not simply to help the marginalised, but to enable churches. Tenants come from a variety of backgrounds. Some are men coming out of prison and stuck in hostels.

Some are recommended by social services, others by refugee agencies.

In the last year HiA have provided homes for refugees fleeing from Sudan and Darfur, the Democratic Republic of Congo, Eritrea, Syria, and Iran. The results to date have been impressive, bearing in mind that many of those helped have multiple personal challenges.

In the annual statement for 2017 Hope into Action report that 87% of tenants succeeded in maintaining their tenancies; 89% of those who had been in custody refrained from crime; 81% of those with addictions reduced or ceased their drug use; 82% reported improved relations with their families; 47% were involved in volunteering, education or training; and 23% had found a job. There is no requirement upon tenants to have any kind of faith (and many clients are Muslim refugees) but many do become believers. There have been endless teething problems. Relationships have broken down. Tenants who seemed well on the way to recovery and stability have gone completely off the rails.

Money has been tight. Most notably however, Ed and his small team have seen God move and provide in amazing, multiple ways. "We have seen miracles, healings, conversions, churches transformed," Ed comments. "I have also gone through some major heart-breaks and dangerous situations, but through it all God has been faithful." Hope into Action tells Ed's story of faith and struggle as he and his wife saw the need, felt the call and stepped out in faith, developed a new theology of sharing and saw both tragic and wonderful results.

It explains how we meet and grow in Christ as we interact with those in the shadows and those hidden in darkness.