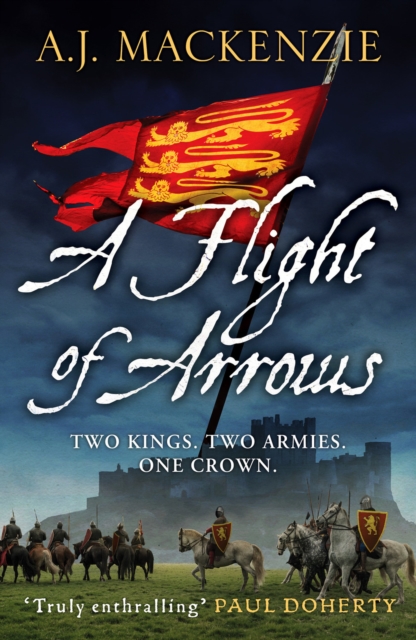 by A. J. MacKenzie

Part of the The Hundred Years' War series

'Unputdownable ... I was blown away' Angus Donald, bestselling author of the Outlaw ChroniclesTwo kings.

Two nations. One crown. The start of an epic historical espionage series by master authors A.J.

His closest heir to the throne is Edward III of England, but it passes instead to Charles' cousin, Phillip, spurring both countries on to war. 1346. Landing at Normandy, Edward's immense army makes inroads into French territory, burning everything in their path.

But the mysterious assassination of an English knight reveals a terrible truth: there is a traitor in their midst.

The king charges Simon Merrivale, the Prince of Wales' herald, with solving the case. As the army marches on towards its destiny, at the awesome scenes of the Battle of Crecy, Simon will uncover a conspiracy that goes to the heart of the warring nations.

Among the ashes and the rubble, their fate will be decided: on the battlefield... and in the shadows. A scintillating medieval adventure of warfare and espionage, steeped in years of research, perfect for fans of David Gilman and Conn Iggulden. Praise for A Flight of ArrowsLike one of those exquisite tapestries with interlacing strands in an array of vivid colour [...] a truly enthralling account of the events leading up to Crecy.

Compulsory reading for all who enjoy that most fascinating period of English history' Paul Doherty, author of The Nightingale Gallery'Fast-paced, action-packed and full of adventure [...] one of the best reads this year' Parmenion Books'A rip-roaring story and devilish plot with outstanding historical detail [...] Mackenzie has created a character who will surely take his place in the canon of historical literary detectives' C.

B. Hanley, author of the Mediaeval Mysteries series'Espionage, treachery and long-buried sins come to the fore in the blood-stained fields of fourteenth-century Normandy.

A compelling story of courage and betrayal - I loved it' Katherine Stansfield, author of the Cornish Mystery series