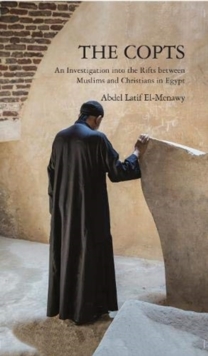 The Copts : An Investigation into the Rifts Between Muslims and Christians in Egypt Paperback / softback

Abdel Latif El-Menawy met and interviewed the late Pope Shnouda, the third Patriarch of Egypt many times during his rule.

Throughout his career in journalism he was constantly in touch with leaders of the Coptic Society in Egypt.

He had unparalleled access to developments of the various crises unravelling in the streets of Egypt as a result of confrontation between religion and politics.

The Copts explains: how Christianity became deeply rooted in Egypt to an extent that Islam was never able to overcome, leading to an uneasy relationship between the two faiths; the main features of the Coptic Church that differ from its Western sister; and how certain cases of conversion from one religion to the other captured the attention of the whole world because of society's reaction to them. It will give accounts, never published before, of direct confrontations between Late Pope Shnouda and both Presidents Late Anwar Sadat and former President Hosni Mubarak.

Abdel Latif also reveals the role the Coptic Church has played in the recent uprising in Egypt.