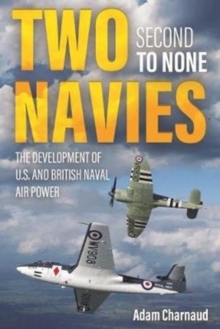 Two Navies Second to None : The Development of U.S. and British Naval Air Power Hardback

In the early 20th century Britain opted for a third fighting force, an air force, and America was experimenting with the world's first vessel with turbo electric drive, Jupiter, a 20,000-ton collier, subsequently converted as their first aircraft carrier, Langley.

A century later America has the capability to launch between 90 and 120 attack aircraft from each of its 16 nuclear carriers, which vessels refuel every twenty-five years, while Britain has a couple of turbo electric drive oil-fired carriers which are only able to operate aircraft with vertical flying capability.

This title compares the development of maritime air power in the British and American navies across the 20th century and right through until the early 21st century.