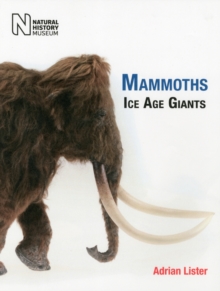 Enormous, elephantine and extinct: the mammoth is the iconic animal of the Ice Age.

These colossal creatures roamed the cold, open landscapes of Europe, Asia, and North America as recently as 20,000 years ago.

Today, their well-preserved fossil remains generate much fascination and speculation around the world.

Mammoths: Ice Age Giants reveals what their life was really like.

It describes their environment, behaviour, evolution and appearance, including new DNA analysis that shows what colour mammoths actually were.

Unravelling the latest scientific research, Adrian Lister explains why this incredible species died out and whether it may be possible to clone them in the future.

He also draws challenging parallels between the fate of the mammoths and that of their close relatives, the living elephants. Throughout the book there are striking photographs of skeletons, skulls, tusks and preserved flesh from the world-famous collections of the Natural History Museum in London, as well as images of the best preserved mammoth in the world, Lyuba.

From the Pleistocene period to our recent past, Mammoths: Ice Age Giants captures evolution in action in the dynamic world of the mammoth.The book is published to tie in with a major new exhibition on mammoths opening at the Natural History Museum in spring 2014.