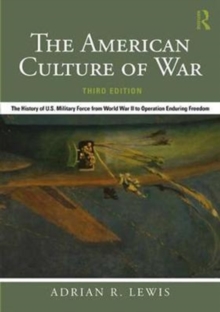 Now in its third edition, The American Culture of War presents a sweeping critical examination of every major American war since 1941: World War II, Korea, Vietnam, the First and Second Persian Gulf Wars, U.S. operations in Iraq and Afghanistan, and the war against ISIS.

As he carefully considers the cultural forces that surrounded each military engagement, Adrian Lewis offers an original and provocative look at the motives, people and governments used to wage war, the discord among military personnel, the flawed political policies that guided military strategy, and the civilian perceptions that characterized each conflict.

This third edition features:A new structure focused more exclusively on the character and conduct of the wars themselvesUpdates to account for the latest, evolving scholarship on these conflictsAn updated account of American military involvement in the Middle East, including the abrupt rise of ISISThe new edition of The American Culture of War remains a comprehensive and essential resource for any student of American wartime conduct.