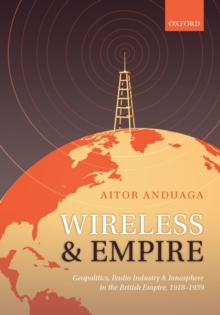 Wireless and Empire : Geopolitics, Radio Industry, and Ionosphere in the British Empire, 1918-1939 Hardback

by Aitor (Research Fellow at the Basque Museum of Science and Medicine History, Basque Country Anduaga

Although the product of a self-proclaimed consensus politics, the British Empire was always based on communications supremacy and the knowledge of the atmosphere.

Using the metaphor of a thread of five pieces representing the categories science, industry, government, the military, and the education, this is the first book to study the relations between wireless and Empire throughout the interwar period.

It is also the first to make full use of the abundant archivematerial and rich sources existing in Britain and the Dominions.

The book examines the evolving connection between the development of imperial radio communications and atmospheric physics; the expansion and strength of the British radio industry and its relationship with the elucidation of theionosphere; and the different extent to which Australia, Canada and New Zealand managed to emulate the British model of radio R&D in the interwar years.

The book ends with a highly original and provocative epilogue: 'The realist interpretation of the atmosphere'.