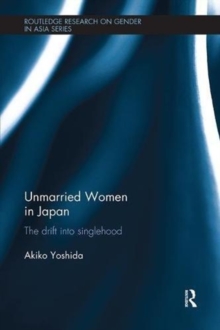 Unmarried Women in Japan : The drift into singlehood Paperback / softback

Yoshida addresses the common misconceptions of single, never-married women and aims to uncover the major social and cultural factors contributing to this phenomenon in Japan.

Based on interviews with married and never-married women aged 25-46, she argues that the increasing rate of female singlehood is largely due to structural barriers and a culture that has failed to keep up with economic changes.

Here is an academic book that is also reader-friendly to the general audience, it presents evidence from the interview transcripts in rich detail as well as insightful analysis.

Thus, this book not only serves to enlighten readers on current issues in Japan - it also provides sociological perspectives on contemporary gender inequality.