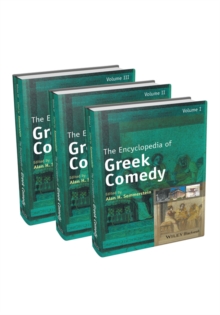 Available online or as a 3-volume print set, The Encyclopedia of Greek Comedy is a comprehensive and accessible reference covering all of Greek comedy and its reception from antiquity to the present. Features the work of nearly 200 established and rising scholars from around the worldContains more than 1300 entries, organized in A-Z format, with helpful cross-references and an index of authors and playsProvides extensive and detailed coverage of the work of those dramatists who have no complete plays extantExplores a wide range of topics, including the varieties and phases of the genre; the authors and their major plays; composition and technique; the relationship between comedy and society; the preservation and transmission of comic texts; responses to Greek comedy by artists from Plato to Picasso and beyond; and modern methods of literary analysis and criticism