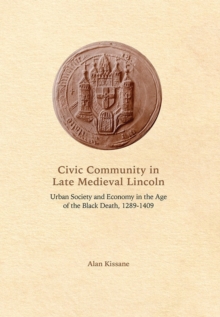 Civic Community in Late Medieval Lincoln - Urban Society and Economy in the Age of the Black Death, 1289-1409 Hardback

The later middle ages saw provincial towns and their civic community contending with a number of economic, social and religious problems - including famine and the plague.

This book, using Lincoln - then a significant urban centre - as a case study, investigates how such a community dealt with these issues, looking in particular at the links between town and central government, and how they influenced local customs and practices.

The author then argues, with an assessment of industry, trade and civic finance, that towns such as Lincoln were often well placed to react to changes in the economy, by actively forging closer links with the crown both as suppliers of goods and services and as financiers.

The book goes on to explore the foundations of civic government and the emergence of local guilds and chantries, showing that each reflected broader trends in local civic culture, being influenced in only a minor way by the Black Death, an event traditionally seen as a major turning point in late medieval urban history. Alan Kissane gained his PhD from the University of Nottingham.