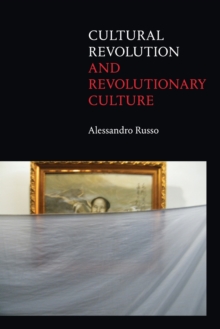 Russo explores four critical phases of the Cultural Revolution, each with its own reworking of communist political subjectivity: the historical-theatrical "prologue" of 1965; Mao's attempts to shape the Cultural Revolution in 1965 and 1966; the movements and organizing between 1966 and 1968 and the factional divides that ended them; and the mass study campaigns from 1973 to 1976 and the unfinished attempt to evaluate the inadequacies of the political decade that brought the Revolution to a close.

Among other topics, Russo shows how the dispute around the play Hai Rui Dismissed from Office was not the result of a Maoist conspiracy, but rather a series of intense and unresolved political and intellectual controversies.

He also examines the Shanghai January Storm and the problematic foundation of the short-lived Shanghai Commune.

By exploring these and other political-cultural moments of Chinese confrontations with communist principles, Russo overturns conventional wisdom about the Cultural Revolution.