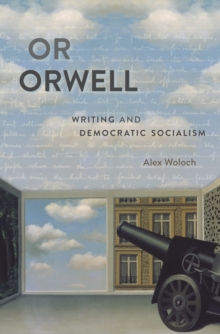 There have been many studies of George Orwell's life and work, but nothing quite like this book by Alex Woloch-an exuberant, revisionary account of Orwell's writing. "Good prose is like a window-pane," Orwell famously avers.

But what kind of literary criticism is possible, face-to-face with Orwell's plain-style prose?

Too often this style has been either dismissed by a seemingly more savvy critical theory, or held up as a reprimand against the enterprise of theory.

In a series of unusually close and intensive readings-focused on the unstable event of writing itself-Woloch recovers the radical and experimental energies of Orwell's prose.

Against accounts that would quickly naturalize Orwell's truthfulness or reduce his window-pane prose to bad faith, Woloch's study bears down on a propulsive irony and formal restlessness that have always been intertwined with Orwell's plain-style.

Such restlessness, far from diluting Orwell's democratic and socialist politics, is at its aesthetic and conceptual core. The first half of Or Orwell ranges across his nonfiction prose, including new readings of "A Hanging," The Road to Wigan Pier, and Inside the Whale.

The second half develops an extended analysis of a single writing project: Orwell's eighty "As I Please" newspaper columns, written for the Socialist weekly Tribune.

Moving through multiple forms and genres, testing the limits of each, Orwell emerges in Woloch's fine-grained account as a boldly unconventional writer and a central figure in twentieth-century literature and political thought.