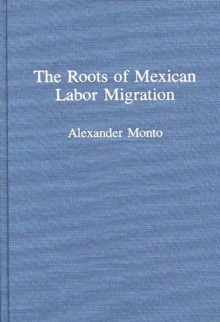 Alexander Monto looks at how labor migration flows from Mexico to the United States are directed and structured, and what changes they bring in the sending and receiving communities. He places cyclical migration in the context of historical and economic developments in Mexico and the United States, and he concludes that the circulatory movement is an element in the well-established world economic system that has endured for a hundred years. Monto focuses on one Mexican town with high migrancy and on one of its migrants' main destinations, Salinas, California. He describes the network linking the two communities, which migrants use to maximize employment, minimize expenses, and return with the proceeds to Mexico, where they will be able to buy more. Monto finds that although macrosocial factors create the economic polarization that propels migration, the migrants are not merely pawns being pushed and pulled; instead, they use circulatory migration as one of several options selected according to their role in their domestic group and the group's particular needs.

He concludes that this labor circulation is not a transitional phase bound to disappear when Mexico's workforce is converted to wage laborers, but a permanent, institutionalized component of Mexico's periphery-core relationship to the United States.

In the next few years, predicts Monto, the proposed North American Free Trade Agreement, together with agricultural consolidation already underway in Mexico, will probably augment rather than reduce migration.