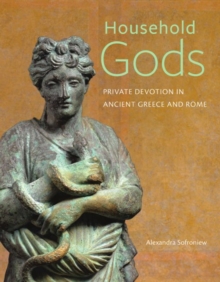 Daily religious devotion in the Greek and Roman worlds centered on the family and the home.

Besides official worship in rural sacred areas and at temples in towns, the ancients kept household shrines with statuettes of different deities that could have a deep personal and spiritual meaning.

Roman houses were often filled with images of gods. Gods and goddesses were represented in mythological paintings on walls and in decorative mosaics on floors, in bronze and marble sculptures, on ornate silver dining vessels, and on lowly clay oil lamps that lit dark rooms.

Even many modest homes had one or more religious objects that were privately venerated.

Ranging from the humble to the magnificent, these small objects could be fashioned in any medium from terracotta to precious metal or stone. Showcasing the collections in the Getty Villa, this book's emphasis on the spiritual beliefs and practices of individuals promises to make the works of Greek and Roman art more accessible to readers.

Compelling representations of private religious devotion, these small objects express personal ways of worshiping that are still familiar to us today.

A chapter on contemporary domestic worship further enhances the relevance of these miniature sculptures for modern viewers.