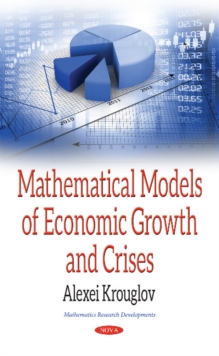 The main goal of this book is to present coherent mathematical models to describe an economic growth and related economic issues.

The book is a continuation of the authors previous book Mathematical Dynamics of Economic Markets (9781594545283), which presented mathematical models of economic forces acting on the markets.

In his previous book, the author described a system of ordinary differential equations, which connected together economic forces behind the products demand, supply and prices on the market.

The author focuses on a specific aspect of how to modify the said system of ordinary differential equations, in order to describe the phenomenon of economic growth.

In order to achieve clarity, the author restricted himself to economic processes arising on the markets of a single-product economy.

Economic growth is presented as a result of savings and investment occurring on the markets.

The markets participants withdraw part of the product from markets in the form of savings and use the withdrawn product in production in the form of an investment.

Contrarily, one observes an economic decline in the opposite situation.

The author looks into various aspects that savings and investment exert on the market.

He presents mathematical models exploring interconnections among these concepts and studies their mutual impacts on both economic growth and decline.

He builds a mathematical model in order to verify a hypothesis that weak recovery after the financial crisis could be attributed to the decline of investments that were not compensated by the decrease of an interest rate.

The author also looks into the phenomenon of economic crises and builds a few mathematical models.

The models of four economic crises are considered. The first model concerns the last financial crisis where an author tried to explain how relatively small disturbances on financial markets had produced a large impact on the real economy.

His conclusion is that fluctuations on connected markets amplify each other, which is known as the resonance phenomenon.

The second model relates to the monetary part of Japanese economic policy known as Abenomics, where the price of Japanese bonds decreases and the yield increases.

The author builds a mathematical model to investigate this phenomenon.

The third model is about a secular stagnation hypothesis advanced by Lawrence Summers.

The author complements his model of economic growth with the external supply of product to the market.

He found that external supply provided with either constant rate or constant acceleration can cause a restricted or unrestricted economic decline, respectively.