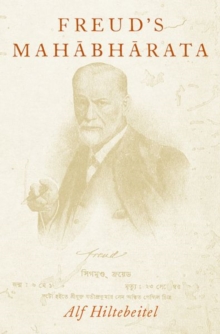 Though Freud never overtly refers to the Mahabharata, many of the Sanskrit epic's themes are illuminated by Freud's thought and, conversely, many incidents in the epic can be used to illustrate Freud's theories.

In Freud's Mahabharata, the companion volume to Freud's India, Alf Hiltebeitel offers what he calls a "pointillist introduction" to a new theory about the Mahabharata based on Freud.

Chapter 1introduces the concept of the preoedipal, along with Freud's discussion of burial alive, ghosts and doubles, and castration anxiety, and looks at parallels with Indian theories of karma and reincarnation.

In Chapter 2 Hiltebeitel draws on Andre Green's concept of "the dead mother," alive but dead to her child, to tell the epic's main story through the interactionsbetween the peace-loving King Yudhisthira and his bellicose mother Kunti.

Chapter 3 takes up three "dead mother" stories in the Mahabharata's early books, all of them featuring Kunti, among a plethora of really dead or divine past mothers in the Pandava lineage.

Next, Chapter 4 looks at Fernando Wulff Alonso's hypothesis that the Mahabharata poets worked from Greek sources in modeling their stories.

Hiltebeitel explores the epic's divine plan of theunburdening of the Earth, the goddess Earth, and its Greek counterpart in the Iliad's plan of Zeus.

Girindrasekhar Bose's concept of the "Oedipus mother" is introduced in Chapter 5 through a discussion of Aravan, a minor figure throughout the Sanskrit epic tradition but one who looms in importance in the Draupadi cult and has a cult of his own,where he is called Kuttantavar.

In both cults Aravan is worshiped for his self-mutilating sacrifice as a battle-opening offering to "mother" Kali, and he is worshipped in his own cult by Indian eunuchs or castrati called Aravanis in his honor.

The book concludes with a new theory of the epic based on Freud's Moses and Monotheism, in which he argued that religious traditions deserve to be studied not only in what they say consciously about themselves, but in what they haveregistered unconsciously from past traumas, loss of memory, and the return of the repressed.