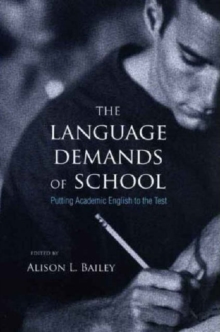 The Language Demands of School : Putting Academic English to the Test Paperback / softback

The Language Demands of School is an edited volume describing an extensive empirical base for academic English testing, instruction and professional development.

The chapters comprise empirical research by Bailey and colleagues at the National Center for Research on Evaluation, Standards, Student Testing (CRESST) at UCLA, and invited contributions by practitioners in the fields of language policy, testing and instruction.

The central focus of the chapters is the research conducted by CRESST over the last two years in an attempt to document the academic English language demands placed on school-age learners of English.

The three additional chapters give the perspectives of a policy-maker at the state level, test developers, and practitioners. The Language Demands of School fills a gap in the current literature by addressing the kind(s) of English required of K-12 English Learner students from an evidence-based perspective.

This is timely given the broader context of the No Child Left Behind Act of 2001, which has prompted school systems to identify English language proficiency tests to meet the federal mandate.

The Language Demands of School is devoted to exploring this topic and to presenting research that illuminates both the questions and the answers.