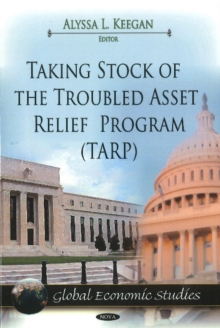 The financial crisis that gripped the U.S. in 2008 was unprecedented in type and magnitude. It began with an asset bubble in housing, expanded in the sub-prime mortgage crisis, escalated into a severe freeze-up of the inter-bank lending market, and culminated in intervention by the U.S. and other industrialised countries to rescue their banking systems.

The centrepiece of the federal government's response to the financial crisis was the Emergency Economic Stabilization Act of 2008 (EESA), which authorised the Treasury Secretary to establish the $700 billion Troubled Asset Relief Program (TARP) and created the Congressional Oversight Panel to oversee the TARP.

This book examines the Congressional Oversight Panel's assessment of TARPS's progress at the end of its first full year existence, and reviews what TARP has accomplished to date and explores where it has fallen short.