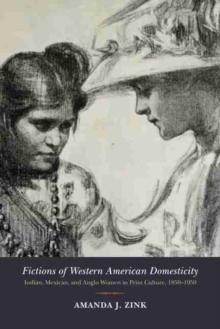 This work provides a compelling explanation of something that has bedeviled a number of feminist scholars: Why did popular authors like Edna Ferber continue to write conventional fiction while living lives that were far from conventional?

Amanda J. Zink argues that white writers like Ferber and Willa Cather avoided the subject of their own domestic labor by writing about the performance of domestic labor by "others," showing that American print culture, both in novels and through advertisements, moved away from portraying women as angels in the house and instead sought to persuade other women to be angels in their houses.

Zink further explores lesser-known works such as Mexican American cookbooks and essays in Indian boarding school magazines to show how women writers "dialoging domesticity" exemplify the cross-cultural encounters between "colonial domesticity" and "sovereign domesticity." By situating these interpretations of literature within their historical contexts, Zink shows how these writers championed and challenged the ideology of domesticity.