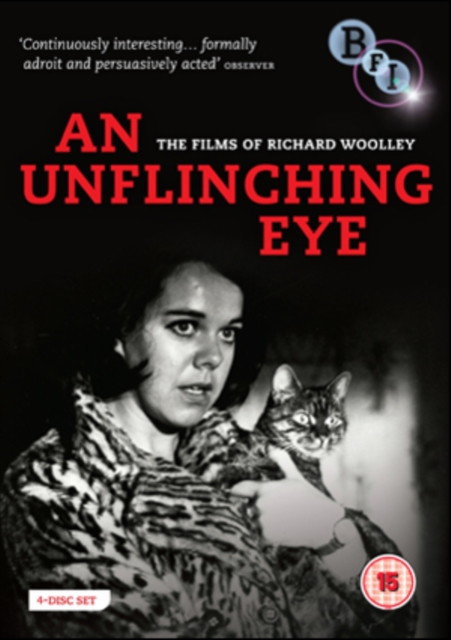 An Unflinching Eye - The Films of Richard Woolley DVD

In 'Illusive Crime' (1976) a wife (Amanda Reiss) is accused of a crime by visiting police officers.

When her husband (James Woolley) returns home her legitimate concerns are not regarded by him and she is accused of hysteria.

In 'Telling Tales' (1978) a working-class and middle-class couple experience similar feelings of alienation within their marriages.

Meanwhile, a planned strike at the local factory has the potential to impact on both couples' future prospects.

In 'Brothers and Sisters' (1981) David Barratt (Sam Dale) is a left-wing activist who resents his wealthy roots and often clashes with his brother James (Robert East), an army officer.

However, following the murder of her sister, both brothers are drawn into the investigation as suspects.

In 'Waiting for Alan' (1984) Marcia (Pickles) is the wife of Alan (Anthony Schaeffer), who views his wife merely as a functioning cog within his life, to provide his meals and wash his clothes.

However, Marcia grows increasingly frustrated by the lack of attention and intimacy in her life.

Finally, in 'Girl from the South' (1988), bored by her rich suburban life and inspired by the romantic novels she consumes, young woman Anne (Michelle Mulvaney) goes to parts of town she would not usually frequent.

Upon meeting Ralph (Mark Crowshaw) she quickly falls in love.

However, her idealistic outlook is tempered by the reality of class and racial prejudice.