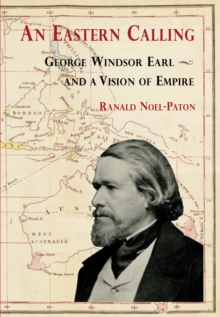 An Eastern Calling : George Windsor Earl and a Vision of Empire Paperback / softback

George Windsor Earl (1813-1865) was one of that great band of young British men who adventured far to the East in the early 19th century to forge careers, make fortunes and help build the Empire. At the age of sixteen he sailed for Western Australia to become one of the early settlers at the Swan River (Perth).

There soon followed four years of sailing, including captaining a trading schooner in the largely uncharted waters of the East.

Returning to London, his widely acclaimed book, The Eastern Seas, appeared in 1837 and Earl sailed back to the East in 1838 as a member of the expedition that founded and manned a new naval station at Port Essington in Northern Australia. G.W. Earl was largely self-educated and mastered a range of languages which included Dutch, French, German, Spanish, Malay and various local dialects.

He was an imperialist in the tradition of his hero, Sir Stamford Raffles and his scholarly interests were legion.

He published numerous works encompassing navigation, hydrology, agriculture, commerce, geography, archaeology and ethnography. Earl later joined the government service in Singapore and filled the last part of his life there and in the Straits Settlements as Law Agent, Journalist, Advocate, Magistrate and Assistant Resident Councillor.

Finally, broken by tropical diseases, this eternally optimistic, adventurous and remarkable man died in Penang in 1865 at the age of 52. An Eastern Calling is the first major biography of George Windsor Earl and has been extensively researched and includes material from the family archives.