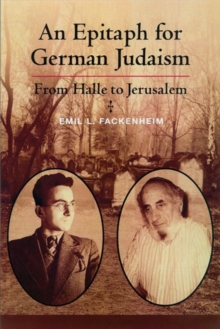 An Epitaph for German Judaism : From Halle to Jerusalem Hardback

Emil Fackenheim's life work was to call upon the world at large - and on philosophers, Christians, Jews, and Germans in particular - to confront the Holocaust as an unprecedented assault on the Jewish people, Judaism, and all humanity.

In this memoir, to which he was making final revisions at the time of his death, Fackenheim looks back on his life, at the profound and painful circumstances that shaped him as a philosopher and a committed Jewish thinker.

Interned for three months in the Sachsenhausen concentration camp after Kristallnacht, Fackenheim was released and escaped to Scotland and then to Canada, where he lived in a refugee internment camp before eventually becoming a congregational rabbi and then, for thirty-five years, a professor of philosophy.

He recalls here what it meant to be a German Jew in North America, the desperate need to respond to the crisis in Europe and to cope with its overwhelming implications for Jewish identity and community.

His second great turning point came in 1967, as he saw Jews threatened with another Holocaust, this time in Israel.

This crisis led him on a pilgrimage to Jerusalem and ultimately back to Germany, where he continued to grapple with the question, How can the Jewish faith - and the Christian faith - exist after the Holocaust?