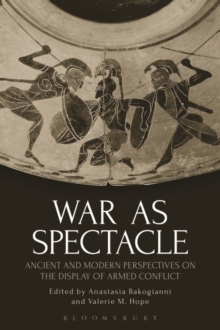 War as Spectacle : Ancient and Modern Perspectives on the Display of Armed Conflict Paperback / softback

War as Spectacle examines the display of armed conflict in classical antiquity and its impact in the modern world.

The contributors address the following questions: how and why was war conceptualized as a spectacle in our surviving ancient Greek and Latin sources?

How has this view of war been adapted in post-classical contexts and to what purpose?

This collection of essays engages with the motif of war as spectacle through a variety of theoretical and methodological pathways and frameworks.

They include the investigation of the portrayal of armed conflict in ancient Greek and Latin Literature, History and Material Culture, as well as the reception of these ancient narratives and models in later periods in a variety of media.

The collection also investigates how classical models contribute to contemporary debates about modern wars, including the interrogation of propaganda and news coverage. Embracing an interdisciplinary approach to the study of ancient warfare and its impact, the volume looks at a variety of angles and perspectives, including visual display and its exploitation for political capital, the function of internal and external audiences, ideology and propaganda and the commentary on war made possible by modern media.

The reception of the theme in other cultures and eras demonstrates its continued relevance and the way antiquity is used to justify as well as to critique later conflicts.