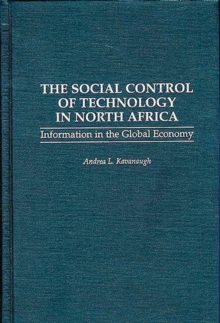 The Social Control of Technology in North Africa : Information in the Global Economy Hardback

In order to improve productivity and economic development, developing countries have been expanding their telecommunications infrastructure and integrating advanced information technology into their socioeconomic system.

Some scholars argue that new media will be integral to the overthrow of authoritarian regimes and will allow democracy to bloom throughout developing countries.

Others claim that new media will strengthen centralized control and further erode social liberty and pluralism.

This study of three North African states-Tunisia, Algeria, and Morocco-argues for a third, more likely outcome. Developing countries, the author argues, are largely able to control the introduction and diffusion of new information technologies and services, including the Internet, using traditional procedures.

The authoritarian governments in North Africa allow a slow, careful disbursement of new media privileges to a select minority.

By maintaining direct or indirect social control over the market for advanced technologies and services, these governments can embrace new media for modernization, economic growth, and integration into the global economy without being overcome by civil unrest or instability.