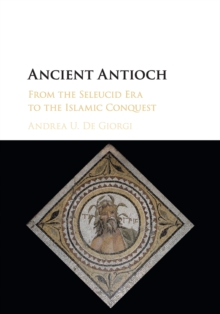 Ancient Antioch : From the Seleucid Era to the Islamic Conquest Paperback / softback

From late fourth century BC Seleucid enclave to capital of the Roman east, Antioch on the Orontes was one of the greatest cities of antiquity and served as a hinge between east and west.

This book draws on a century of archaeological fieldwork to offer a new narrative of Antioch's origins and growth, as well as its resilience, civic pride, and economic opportunism.

Situating the urban nucleus in the context of the rural landscape, this book integrates hitherto divorced cultural basins, including the Amuq Valley and the Massif Calcaire.

It also brings into focus the archaeological data, thus proposing a concrete interpretative framework that, grounded in the monuments of Antioch, enables the reader to move beyond text-based reconstructions of the city's history.

Finally, it considers the interaction between the environment and the people of the city who shaped this region and forged a distinct identity within the broader Greco-Roman world.