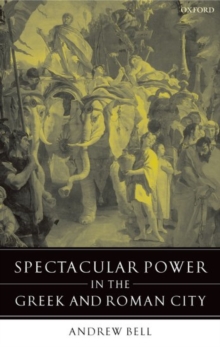 Spectacular Power in the Greek and Roman City Paperback / softback

This study of the visible representation of power and prestige in both Greek and Roman polities of the ancient world demonstrates the importance of crowds' aesthetic and emotional judgement upon leaders and their ambitious claims for immediate and lasting significance.

The spectacular rhetorics of a variety of individuals, from early Greece until the end of the Roman Republic, are considered, including Alcibiades, Demetrius Poliorcetes, the early Ptolemies, AntiochusIV, Pompey, Cicero, and Caesar.

Great men sought visible pre-eminence and their methods and success reveal a great deal about the habits and values of their civic societies.