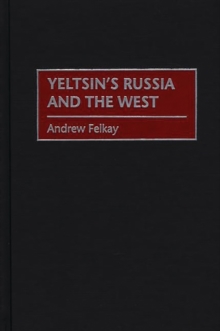 Yeltsin's Russia and the West Hardback

Throughout history, strong-willed Russian autocrats have rescued their country from foreign domination, disorder, and possible chaos, often using the cruelest means to achieve their ends.

Gorbachev tried to implement socialism with a human face in the Soviet Union, but failed.

In the early 1990s, once again, Russia needed a strong hand to pull it out of chaos.

In August 1991 Boris Yeltin emerged as such a leader, but unlike earlier strong leaders, he was determined to pull Russia out of the Communist morass and affect his country's integration with Western democracies through democratic means. Felkay carefully analyzes the impact of Yeltsin on the newly evolving relationship between Russia and the Western democracies.

But separating the process of formulating foreign and domestic policies would be impossible.

From the onset, Yeltsin kept both reins of decision-making firmly in hand.

Accordingly, Felkay assesses Yeltsin's effectiveness in moving his country toward democracy and a market economy, and he shows the ups and downs of his pro-Western foreign policies.

This book provides an important analysis for scholars, students, and other researchers involved with Russian studies, international relations, and comparative politics.