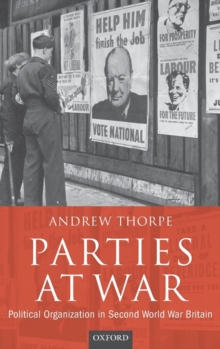 Political parties formed the cornerstone of the liberal democracy for which Britain claimed it was fighting in the Second World War.

However, that conflict represented the most sustained challenge to the British party system during the twentieth century.

War forced the suspension of normal electoral politics, and exerted considerable extra demands on the time and loyalties of party activists and organizers.

This all posed a serious challenge to the Conservative,Labour and Liberal parties.

Parties at War uses an unusually broad and deep range of records of the main political parties to explore how they responded to the challenge of war.

Extensive use of the local as well as the national-level papers of the major parties offers a fuller picture than ever previously attempted. Andrew Thorpe focuses on what parties actually did, at both local and national levels, to sustain their organization during the war.

He assesses the varying impacts of war, not just on each of the parties, but also over time, and between the different regions and areas of Britain.

Thorpe demonstrates how wartime struggles over organization had significance not just for the election of the first majority Labour government in 1945, but also for the longer-term development of 'party' in modernBritish politics.