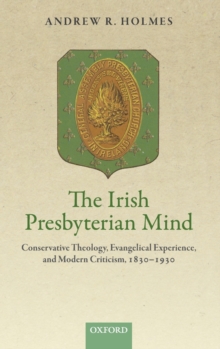 by Andrew R. (Lecturer in the School of History, Anthropology, Philosophy, and Politics, Lectur Holmes

The Irish Presbyterian Mind considers how one protestant community responded to the challenges posed to traditional understandings of Christian faith between 1830 and 1930. Andrew R. Holmes examines the attitudes of the leaders of the Presbyterian Church in Ireland to biblical criticism, modern historical method, evolutionary science, and liberal forms of protestant theology.

He explores how they reacted to developments in other Christian traditions,including the so-called 'Romeward' trend in the established Churches of England and Ireland and the 'Romanisation' of Catholicism.

Was their response distinctively Presbyterian and Irish?

How was it shaped by Presbyterian values, intellectual first principles, international denominational networks, identitypolitics, the expansion of higher education, and relations with other Christian denominations?

The story begins in the 1830s when evangelicalism came to dominate mainstream Presbyterianism, the largest protestant denomination in present-day Northern Ireland.

It ends in the 1920s with the exoneration of J. E. Davey, a professor in the Presbyterian College, Belfast, who was tried for heresy on accusations of being a 'modernist'.

Within this timeframe, Holmes describes the formation andmaintenance of a religiously-conservative intellectual community.

At the heart of the interpretation is the interplay between the Reformed theology of the Westminster Confession of Faith and a commitment to common evangelical principles and religious experience that drew protestants together from variousdenominations.

The definition of conservative within the Presbyterian Church in Ireland moved between these two poles and could take on different forms depending on time, geography, social class, and whether the individual was a minister or a member of the laity.