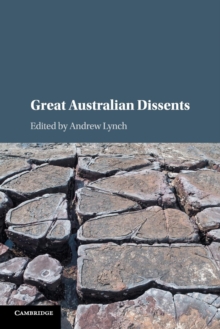 When judges disagree, those in the minority write a dissenting opinion.

This book considers the great dissents in Australian law.

Their worth may derive from numerous factors, including their rhetorical force as a piece of legal reasoning or emotive power as a judicial lament for the 'error' into which the majority has fallen; the general importance of the issue at stake; as a challenge to the orthodoxy; and, sometimes, the subsequent recognition of a dissenting opinion's correctness and its ultimate vindication.

On some occasions, all these features may be strongly present, on others only some.

Through a diverse selection of memorable dissenting opinions, this book illuminates the topic of judicial disagreement more generally - not only through examples of instances when minority opinions have been distinctly valuable, but by drawing out a richer understanding of the attributes and circumstances which lead some dissents to become iconic, while so many lie forgotten.