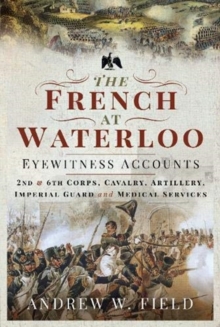 This volume of French eyewitness accounts of Waterloo, published for the first time in full in English, completes Andrew Field's pioneering work on the French experience in this decisive battle.

These vivid recollections add a new dimension to our understanding of what happened on 18 June 1815. Readers will now be in a position to come to their own conclusions and they can compare the French accounts with those of soldiers from the allied armies, in particular the British, which have largely determined our assumptions about the battle for the last 200 years.

They will also gain a heightened insight into the trauma that the French eyewitnesses went through on the battlefield and afterwards as they tried to explain and come to terms their loss. This second volume features graphic descriptions of the battle as it was remembered by men of the 2nd and 6th corps, cavalry, artillery and Imperial Guard and medical services of Napoleon's army.

Their words give us not only a telling inside view their actions during that extraordinary day, but they also record in graphic detail what they saw and show us how they reacted to Napoleon's historic defeat.