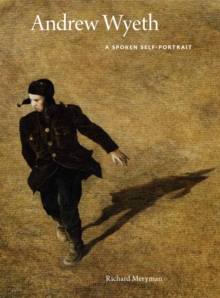 Richard Meryman began an enduring friendship with Andrew Wyeth (1917-2009) while on the job as a Life magazine editor in 1964.

For Meryman, this unique friendship yielded more than four decades of recorded conversations with Wyeth, his family, friends and neighbors in Wyeth's homes in Pennsylvania and Maine.

Meryman notes that, whether during formal interviews, shared meals, car rides or long walks, "Wyeth applied to himself the same sensitive understandings that fueled his art.

A lifelong realist who swam against the art world tide of modernism, he showed himself to be fundamentally a painter of emotion--of people and objects that somehow embodied his memories and imagination, triggering feelings inexpressible in words, but recognized by viewers." In five skillfully crafted monologues composed by Meryman around key themes in Wyeth's work, we hear the voices of not only the artist but also his subjects, neighbors, relatives and critics.

The book includes reproductions of the works of art discussed by Wyeth in his own words, as well as previously unpublished photographs of Wyeth's studio taken in 2009. Richard Meryman is the author of the acclaimed biography Andrew Wyeth: A Secret Life (1996).