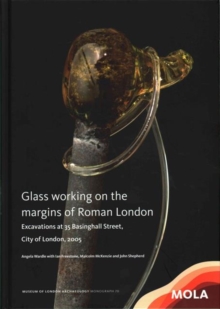 Glass working on the margins of Roman London Hardback

Excavations in the upper Walbrook valley, in a marginal area in the north-west of the Roman city, recovered over 70kg of broken vessel glass and production waste from a nearby workshop, giving new insights into the workings of the glass industry and its craftsmen.

The area was developed in the early 2nd century AD, with evidence of domestic buildings and property boundaries.

Two later buildings constructed in the mid 2nd century AD may have been associated with the glass-working industry.

The disposal of a huge amount of glass-working waste in the later 2nd century signals the demise of the workshop, with the area reverting to open land by the 3rd century AD.

The comprehensive nature of the glass-working waste has made it possible to study the various processes - from the preparation of the raw materials in the form of cullet, broken vessel and window glass, to the blowing and finishing of the vessel.

All the glass originated ultimately in the eastern Mediterranean, some of it arriving as raw glass chunks, which was supplemented by cullet collected locally for recycling.

A review of the current evidence for glass working in London also examines the implications for the organisation of the industry.