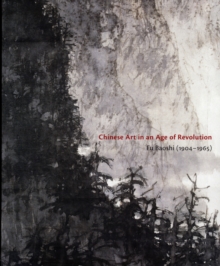 Part of the Cleveland Museum of Art (Yale) series

One of the preeminent figures in 20th-century Chinese art, Fu Baoshi (1904-1965) revolutionized the tradition of Chinese ink painting, opening the door to innovations by subsequent generations.

As both an art historian and a painter, he directed his work toward protecting cultural heritage in times of war and revolution.

From traditional-style landscape and figure painting to political artwork manifesting state ideology during the Mao era, Fu's work demonstrates his search for a unique artistic language that speaks for the self and the nation.

Using native tradition as an essential element, Fu's artistic modernity defined Chinese art as a discipline distinct from Western and international socialist art of the time.

Chinese Art in an Age of Revolution is the first comprehensive retrospective of Fu's work to be published in the West.

The book includes more than 100 artworks that demonstrate his stylistic transformation across several decades.