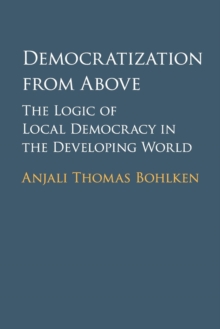 Democratization from Above : The Logic of Local Democracy in the Developing World Paperback / softback

Democratization from Above seeks to explain why some national and state governments in the developing world introduce reforms to make local governance more democratic while others neglect or actively undermine democracy at local levels of government.

The study challenges conventional wisdom that local democratization is implemented as a means of granting more autonomy to local actors.

Instead, Anjali Thomas Bohlken argues that local democratization offers higher level government elites who lack control over party organizational networks an alternative means of increasing the effectiveness of local intermediaries on whom these elites rely to mobilize political support.

The book starts with a focus on India and uses original data, and a combination of qualitative and quantitative evidence, to show support for the argument.

The study then relies on an original cross-national dataset to show how the argument helps explain the variation in the implementation of local democratization reforms across the developing world.