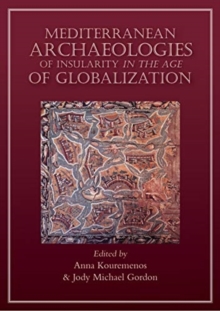 Mediterranean Archaeologies of Insularity in the Age of Globalization Paperback / softback

Influenced by today's hyper-connected age, scholars no longer perceive the Mediterranean as a static place where "Greco-Roman" culture was dominant, but rather see it as adynamic and connected sea where fragmentation and uncertainty, along with mobility and networking, were the norm.

Hence, a current theoretical approach to studying ancient culture has been that of globalization.

Certain eras of Mediterranean history (e.g., the Roman empire) known for their increased connectivity have thus been analyzed from a globalized perspective that examines rhizomal networking, cultural diversity, and multiple processes of social change.

Archaeology has proven a useful discipline for investigating ancient "globalization" because of its recent focus on how identity is expressed through material culture negotiated between both local and global influences when levels of connectivity are altered.

One form of identity that has been inadequately explored in relation to globalization theory is insularity.

Insularity, or the socially recognized differences expressed by people living on islands, is a form of self-identification created within a particular space and time.

Insularity, as a unique social identity affected by "global" forces, should be viewed as an important research paradigm for archaeologies concerned with re-examining cultural change. The purpose of this volume is to explore how comparative archaeologies of insularity can contribute to discourse on ancient Mediterranean "globalization." The volume's theme stems from a colloquium session that was chaired by the volume's co-editors at the Annual Meeting of the Archaeological Institute of America in January 2017.

Given the current state of the field for globalization studies in Mediterranean archaeology, this volume aims to bring together for the first time archaeologists working ondifferent islands and a range of material culture types to examine diachronically how Mediterranean insularities changed during eras when connectivity increased, such as the Late Bronze Age, the era of Greek and Phoenician colonization, the Classical period, and during the High and Late Roman imperial eras.

Each chapter aims to situate a specific island or island group within the context of the globalizing forces and networks that conditioned a particular period, and utilizes archaeological material toreveal how islanders shaped their insular identities, or notions of insularity, at the nexus of local and global influences.