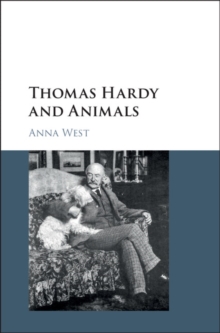 Thomas Hardy and Animals examines the human and nonhuman animals who walk and crawl and fly across and around the pages of Hardy's novels.

Animals abound in his writings, yet little scholarly attention has been paid to them so far.

This book fills this gap in Hardy studies, bringing an important author within range of a new and developing area of critical inquiry.

It considers the way Hardy's representations of animals challenged ideas of human-animal boundaries debated by the Victorian scientific and philosophical communities.

In moments of encounter between humans and animals, Hardy questions boundaries based on ideas of moral sense or moral agency, language and reason, the possession of a face, and the capacity to suffer and perceive pain.

Through an emphasis on embodied encounters, his writings call for an extension of empathy to others, human or nonhuman.

In this accessible book Anna West offers a new approach to Hardy criticism.