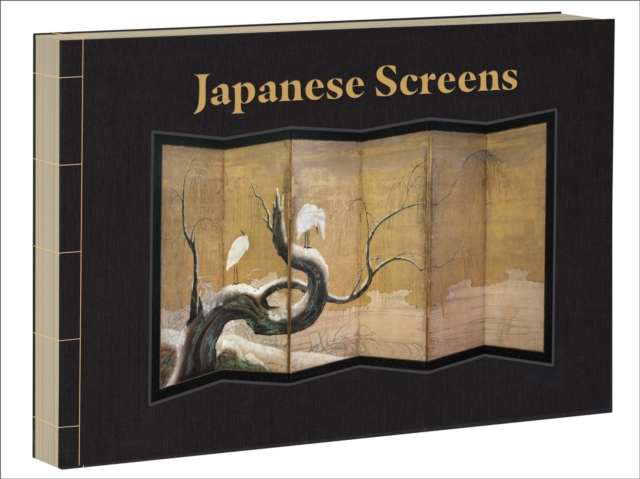 Japanese screens (byobu) are made of wooden lattices with two to twelve panels, covered with a canvas of paper or fabric.

Artists, embracing the dynamic format of screens, incorporated shadows and other elements on the canvas to direct the viewer's eye from one panel to the next.

Screens are unique for being beautiful artworks as well as lightweight, portable objects, acting as backdrops for court ceremonies or partitions for intimate tea services. This sumptuous book explores the 1,300-year history of screens created in Japan.

In the text, leading experts on Japanese art and culture describe how screens developed from the 8th to the 21st century, from their ceremonial use in royal residences and Buddhist temples to their functional and decorative use in the homes of samurai and aristocracy.

The authors examines the stylistic evolution of screens and the wide variety of subjects depicted, such as flying dragons, the passing of seasons, monumental battles, and The Tale of Genji. This book includes 250 colour illustrations, many that are reproduced to full page, and shows the screens to their best advantage with a landscape orientation and large-format size.

It features Japanese-sewn binding and is kept in a clamshell box, which contains foldout poster reproductions of six screens housed in a separate pocket inside the box.

This volume is an elegant addition to the library of any admirer of Japanese art.