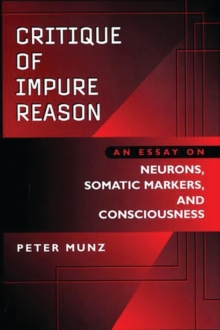 Critique of Impure Reason : An Essay on Neurons, Somatic Markers, and Consciousness Hardback

Thanks to the enormous progress of neuroscience over the past few decades, we can now monitor the passage of initial stimulations to certain points in the brain.

In spite of these findings, however, subjective consciousness still remains an unsolved mystery.

This volume exposes neuroscience and cognitive science to philosophical analysis and proposes that we think of our conscious states of mind as a composite phenomenon consisting of three layers: neuronal events, somatic markers, and explicit consciousness.

While physics and chemistry can and have been successfully employed to describe the causal relation between the first two layers, the further step to articulate consciousness is purely interpretative and points to the preponderant importance of language. Language is essential for the transformation of inchoate, not very informative somatic markers and mere moods into full consciousness and appraised emotion.

Munz uses literary examples to shift our understanding of the mind away from computational models and to show how eloquence about our states of mind is manufactured rather than caused.

He firmly rejects the efforts of both Freud and non-Freudian psychologists to find a scientific explanation for such manufacture and to make a science out of the eloquence of folk psychology.

Instead he argues that the many ways eloquence is being manufactured to transform somatic markers into conscious states of mind are best accounted for in terms of Wittgenstein's conception of language games.

This volume challenges most current thinking about consciousness and mind and will appeal to philosophers, psychologists, neuroscientists, and linguists. 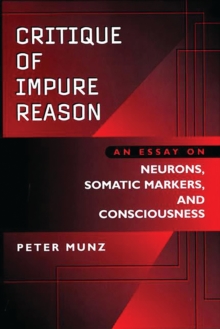 Critique of Impure Reason: An Essay on...