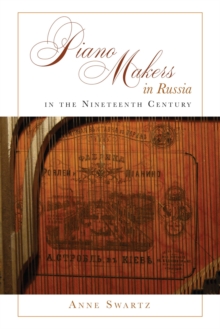 Piano Makers in Russia in the Nineteenth Century Paperback / softback

Piano Makers in Russia in the Nineteenth Century is a richly detailed thematic study of the history of the piano in Russian society from its beginnings with the European artisans who settled in St.

Petersburg in the early decades of the century through the transition to Russian-owned family firms.

The piano played a defining role in the shaping of Russia's musical culture in the nineteenth century, as artisans and entrepreneurs provided the foundation for the great tradition of the Russian virtuoso in the performance and the composition of piano music.

It also helped bring about a transformative change in the material culture as the piano expanded its reach from the court and the nobility to include music enthusiasts from all social classes and Russian families in their homes.

This historical study brings to light the impact of neglected piano artisans in nineteenth-century Russia, and presents a fresh view of the social and economic ties between the state and the piano-manufacturing artisans in an era largely defined by handcrafting and entrepreneurship.

It contributes significantly to current issues surrounding the role of the piano and the entrepreneur-artisans in the urban centers of imperial Russia and represents an expansion of what is currently known about the piano builders who established workshops in Russia beginning in the late 1830s and 1840s, well before the heyday of the virtuoso in that country.

Rare documents, including letters, memoirs, gazettes, exhibition catalogs, music journals, and administrative reports, form the nucleus of this book and provide fascinating insights about state and private patronage and the class/economic issues related to the affordability and prestige of the piano in Russia.

Issues surrounding the transformation of the music industry in Russia, the role of women as patrons and performers, the exportation of instruments to the Russian Far East, and the complex system of tariffs and trade protection that benefited domestic piano manufacturers provide this book's thematic links.

Conclusions indicate that while favorable tariff laws and state-imposed economic policies benefited the family-owned firms in the nineteenth century, they remained in effect in the decades after the nationalization of the piano industry in 1917. 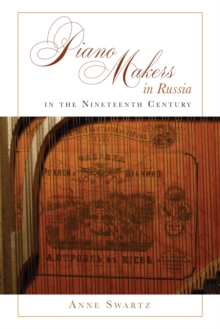 Piano Makers in Russia in the...