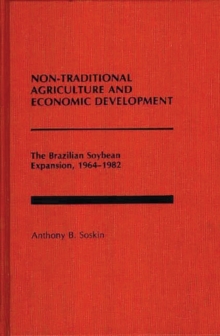 by Anthony B. Soskin

Non-Traditional Agriculture and Economic Development identifies the implications of Brazilian economic development of government support for rapid growth of non-traditional agricultural crops such as soybeans.

The volume established a framework for the study of these implications via analyses of: objectives of the Brazilian government in the period 1964-1982; agricultural policies and the policy instruments put into place to achieve these objectives; micro and macro impacts upon the relevant sectors of the economy; importance of soybean expansion upon Brazil's foreigh trade.

Finally, the author links the Brazilian experience to some of the classical theories of economic development.

He concludes that the considerable success in rapid expansion of the soybean crop has not been without drawbacks, in particular: growth at the expense of traditional staple crops and reliance upon imported technologies.