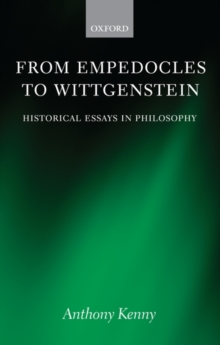 From Empedocles to Wittgenstein : Historical Essays in Philosophy Hardback

From Empedocles to Wittgenstein is a collection of fifteen historical essays in philosophy, written by Sir Anthony Kenny in the early years of the 21st century. In the main they are concerned with four of the great philosophers whom he most esteems, namely Plato, Aristotle, Aquinas, and Wittgenstein. The author is not only one of the most respected historians of philosophy, and possibly the widest-ranging, but also one of the most successful at writing onthe subject for a broad readership. In this volume he presents scholarly explorations of some themes which caught his interest as he worked on his acclaimed four-volume New History of Western Philosophy.