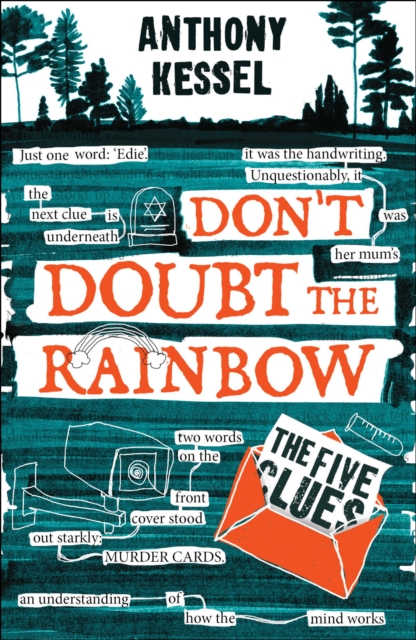 Part of the Don't Doubt the Rainbow series

The first book in the series, The Five Clues, is a real-time murder-mystery thriller and family drama, combining an exciting race against time with a heart-rending story about a teenager learning to live with the loss of a beloved parent. Walking back from her mother's grave, 13-year-old schoolgirl Edie Marble finds a note in a pocket of the sheepskin coat that she hasn't worn since the day, a year earlier, when she received the awful news of her mother's death.

The note is from her mother, who had been looking into a corporate human rights violation and had become fearful for her life after receiving death threats.

She trusts only Edie - because of their special bond and Edie's intelligence - and has laid a trail of clues for Edie to find that will help her to shed light on the violation and uncover the mystery around her death. Through her wit and determination, Edie steadily gathers evidence and negotiates the dramatic twists and turns of the story by collaborating with her friends and family to gradually unearth a sinister attempt by a pharmaceutical company to conceal their illegal development of a lethal virus. As Edie's investigations progress she is introduced, in parallel, to the Three Principles, which help her conquer various psychological stresses and support her in coming to terms with her grief. Reading age 11+