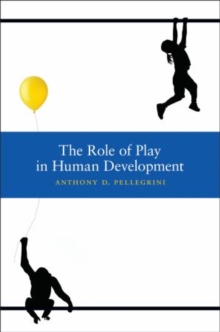 The Role of Play in Human Development Hardback

While the subject of play may seem trivial for behavioral science, E.O.

Wilson noted that understanding the significance of play is an important challenge facing scholars in these fields.

Play is observed among juveniles across a number of animal species and is especially prevalent in young mammals, yet it is difficult to define or to attribute functional significance to it.

In this book, Pellegrini argues that play is an excellent example of the ways in whichbiology and culture influence each other, especially during childhood.

Specifically, the innovative possibilities associated with different forms of play behavior during the juvenile period can influence individuals' skill acquisition, and possibly influence the development of the species.

In order tounderstand play in this broad sense, it is necessary to understand its phylogenetic development (across monkeys, great apes, and humans), its place within human development, and its function(s) and atecedents.

This will be the only volume to provide a coherent theoretical framework addressing the role of play in development.

In his concluding chapter, Pellegrini will synthesize his arguments and theory, and speculate about directions for future research in the area. Because of these two aspects, this book has the potential to be a highlyinfluential book for scholars in developmental psychology, educational psychology, evolutionary biology, and play theorists in anthropology.