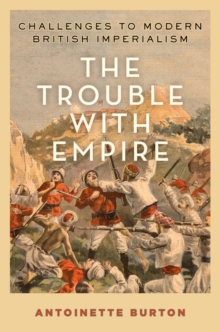 The Trouble with Empire : Challenges to Modern British Imperialism Hardback

Incredibly, there is no comprehensive history dedicated to resistance in the 19th and 20th century British empire.

This is not for want of attention to the enemies of imperialism.

There are accounts of the nature and character of colonial discourse and of the response of discrete nationalist figures and organizations to the incursions of the colonial state.

There are narratives of episodic rebellion and uprising and diagnoses of imperial fatigue and decline.

Thereare even a few choice histories of metropolitan anti-imperialism.

But synthetic analyses of those who struggled with and against imperial power have failed to materialize, even as imperial blockbusters fly off the shelves, both virtual and real.

This is particularly striking in an era of spectacularand empire-humbling counterinsurgency like our own.

The "Pax Britannica" is thus not simply an ornamental trace of mid- to high-Victorian optimism that guaranteed the benefits of the civilizing mission.

In the absence of counter-narratives of protest, resistance and revolution, it remains the working presumption of British imperial history in the 21st century.

This project offers the first thoroughgoing account of what British imperialism looked like from below and of how tenuous its hold onalien populations was throughout its long, unstable life. The Trouble with Empire is intended as a brief but thorough introduction to the nature and consequences of resistance to British imperialism.

It spans the 19th and 20th centuries, when discontented subjects of empire made their unhappiness felt across the globe, from Ireland to Canada to India to Africa to Australasia, in direct response to incursions of military might and imperial capitalism.

Some of these instances, such as the Indian Mutiny and the Anglo-Zulu War, are extremely well known. Those deemed "lesser" - the first and second Afghan Wars and the Opium War, for example - have also gained notoriety as Queen Victoria's "little wars." By taking the long view, moving not just across a variety of geopolitical sites but also across the whole of the period 1840-1955, thecommonalities between ostensibly different forms of resistance-in political settings, at workplaces, and at borders-can be better seen and, thus, the structural weaknesses of imperial formations can be examined.

The emphasis on the power of protest is intended, in other words, not only to reveal indigenous agency but to illuminate the limits of imperial power, official and unofficial, as well.