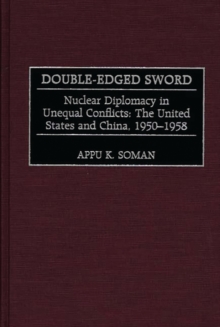 An examination of the political and diplomatic role of American nuclear weapons in conflicts with a non-nuclear China in the Korean War and the Taiwan Strait crises of 1954-1955 and 1958, this study analyzes the American tendency to become involved in confrontations with far weaker powers over issues of very little strategic significance to the United States.

Washington threatens these adversaries with the use of incommensurate levels of force, then ultimately backs down in the face of international and domestic opposition to ill-considered plans to use force.

He argues that the goal of American nuclear diplomacy in the spring of 1955 was to provoke a war with China, rather than to deter a Chinese attack on Taiwan.

Finally, he lays out, for the first time in print, the elaborate diplomacy that Secretary of State John Foster Dulles initiated to defuse the 1958 crisis, involving a major shift in American policy that still remains hidden from the public as well as historians.

Highlighting the central role of nuclear diplomacy in these crises, this book draws conclusions on the efficacy of such diplomacy, the impact of these crises on the development of policies of massive retaliation and limited war, the consequences of Dulles's brinkmanship, and the revival of nuclear diplomacy by the Clinton administration in conflicts with non-nuclear adversaries.