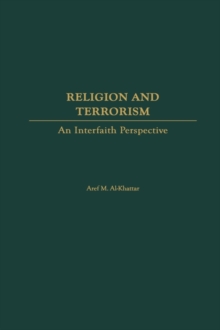 Although religion-based terrorism was certainly not uncommon before the events of September 11, 2001, there is now a greater call for an explanation of these actions.

In this new study, Al-Khattar seeks to define religion-based terrorism as seen by the followers of different religious traditions in order to facilitate understanding of this international problem.

He discusses religion-based terrorism from three perspectives (Judaism, Christianity, and Islam) and offers a theoretical analysis from a criminological perspective of the justifications for such acts.

Interviews with leaders from the three major religions provide background from their holy books to contextualize the arguments that terrorists use to rationalize their actions. As the first researcher to apply the Techniques of Neutralization Theory, a traditional criminological theory, to explain such religion-terrorism, Al-Khattar examines the primary data to understand the motivations beyond the surface explanations offered by the perpetrators and adherents to their causes.

Terrorists are considered as traditional criminals, despite their claims of nobler callings.

Through utilization of this theoretical approach, the study offers practical suggestions on how this criminal behavior might be dealt with by law enforcement, society, and religious institutions themselves.