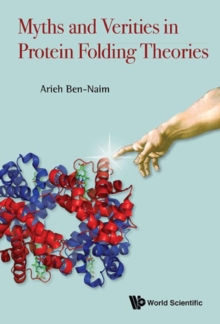 by Arieh (The Hebrew Univ Of Jerusalem, Israel) Ben-naim

This book tells the story of a whole field of research which went disastrously wrong in many different directions when the wrong tools were used and the wrong targets aimed at, to solve a problem.It all started from the misinterpretation of Schellman's experiments which were carried out in the mid-1950s, and which were later encapsulated by the so-called 'Hydrogen-bond inventory argument.' As a result, hydrogen bonding was ignored in protein folding; along with that a whole repertoire of other possible hydrophilic effects were not even considered.

Against this background the hydrophobic effects, as suggested by Kauzmann, became the single most important effects in protein folding.In addition, as a result of the misinterpretation of Anfinsen's hypothesis, as well as misunderstanding of the Second Law, people made futile attempts to search for the structure of proteins in the global minimum of either the Energy, or the Gibbs Energy Landscape.